The son of Jazz musicians Aaron Sachs and Helen Merrill, Alan is an American vocalist, guitarist, songwriter, actor and model. In the early 1970s Merrill was the first Westerner to achieve pop star status in Japan.

You can check out more on Alan & where Alan will be performing next @ his website AlanMerrill.com or on Facebook / Alan Merrill

Alan has written and performed many great songs, but is still best known for writing and originating the song I Love Rock’n’Roll one of the biggest selling rock songs in history, on Mickie Most’s RAK Records in 1975 with his group Arrows.

Chris Cacavas & Edward Abbiati. Me And The Devil. Harboursong Records. 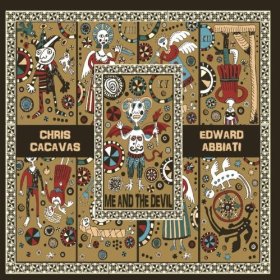 This album is somewhat of a summit meeting of two (plus two) of the most interesting characters in Americana music today. Chris Cacavas is of course the keyboard player for the troubled troupe that was Green On Red way back in the eighties before releasing a series of essential recordings with his band Junkyard Love. Edward Abbiati is the UK born leader of Italian Americana band Lowlands who have intrigued since their first release, The Last Call, in 2008 with the essence of Bruce Springsteen, Woody Guthrie and Richmond Fontaine in their DNA. Cacavas guested on Lowlands’ debut album and last year he travelled from his current domicile in Germany to North Italy to record Me And The Devil with Abiatti picking up a crack rhythm section along the way, Winston Watson on drums, one of Dylan’s Never Ending Tour stalwarts (as well as past duties with Giant Sand…

Forty years on from the UK based 1970s RAK Records band The Arrows, and these songs are still as strong and memorable as ever.
The new version of Alan Merrill’s classic “I Love Rock’n’Roll” still kicks as much ass as it ever has.
It’s a testament to Merrill’s talent for a great tune that this song, ubiquitous as it is in our culture due to the almost innumerable cover versions and mash-ups, always manages to sound fresh and current.This version has Merrill’s spectacular rock-vocal talents up front and center more than in previous versions, I feel. It’s a monster, and it would be so good to see Alan Merrill himself do well with this song that has helped build the careers of so many other singers. I have always felt that his voice is the best suited to it of them all.The next two songs are the ones that were the biggest hits for the Arrows in the UK and the two that are not original Arrows compositions. Touch Too Much is a rock’n’roll monster, a driving , sexy, fun track and My Last Night With You is a slow doo-wop style ballad. They’re both great to sing along to, wonderful party time songs.Moving Next Door To You and Love Rider are good indicators of how the Arrows were really leather clad rockers that had been dressed in boy-band clothing to suit the early 70s pop market. This is them breaking out and showing their rock roots. The first is a sexy sleazy earworm that you’ll still be singing hours later, and Love Rider is a screamer of a track, it never lets go of you from start to end. Fantastic.Bring Back the Fire is a big torch song ballad that ought to be much better known than it is. All of the Arrows songs are very commercially appealing and Alan Merrill’s back catalogue is a goldmine for anyone looking for top quality songs that sound fresh and new.

Dare You Not To Dance is a wonderful thing, a funky, jazzy, busy fusion of such perfect construction that you will feel like you have always known it. It has that big “West Coast” feel wrapped in a perfect pop song

Faith In You closes out this CD… another beautifully crafted, beautifully executed song. This EP is real value for money.. EP? 8 tracks? Isn’t that an album? Whatever… This CD is great value for money. I love it. It is a work of a master. I could listen to Alan Merrill sing all day everyday. What a wonderful voice.

The musicianship is top notch and the songs all superb. Please buy it and show appreciation for Alan Merrill who is Rock ‘n’ Roll’s best kept secret and one of its greatest treasures ♥   BUY IT HERE